David was re-elected as a Kent  County Councillor for Sevenoaks Rural North East on 6 May 2021.

He has lived in his division of Sevenoaks Rural North-East for nearly forty years and after a career in marine surveying became a County Councillor nearly twenty years ago.

He lives in New Ash Green with his extended family and is very much part of the local community, working closely with the District Council and four Parish Councils, his local schools and the many clubs and organisations that Daivd believes makes the area such a delightful place to live.

He finds that being a County Councillor is a multi-facetted job. First, he is answerable to the electorate and he relishes the challenge of resolving their enquiries and problems with highways and transport, school admissions, social care and young people; He always visits people who contact him and will represent them when they wish it.  Second, he has a busy life at County Hall as Vice-Chairman of the Council and with other duties concerned with the governance of the county. Last, he has worked with other Trustees at Turner Contemporary in Margate and is a busy member of the Cyclopark Trust at Gravesend. He is also, a school governor.

He has been able to fund many local highways schemes and community projects. He tries to be imaginative and encourage work with young people, the environment and the local churches that do such valuable work.

David believes that being a County Councillor has ceased to be something he does and is now what he is. My appetite for the work has never diminished.

Outside of KCC, he volunteers at Ightham Mote, a National Trust property near Sevenoaks, where he talks to visitors about Tudor history. He is an horologist and restores antique clocks when not riding his bike to keep youthfully fit. 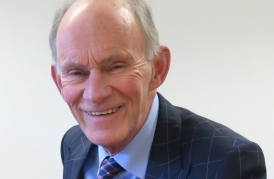