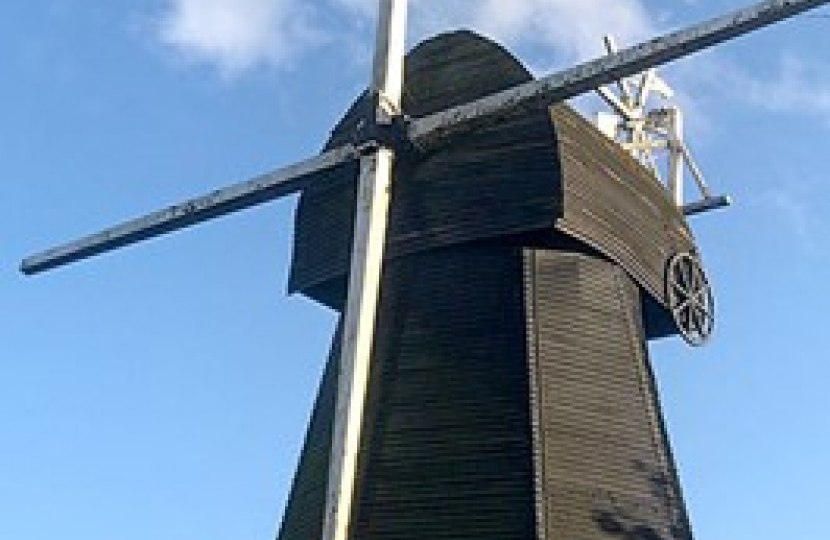 KCC Conservative councillor, David Brazier, went to inspect the West Kingsdown six-sided smock windmill at the end of February. The mill, once a common type in Kent, had been closed throughout 2020 for major repairs. Much of the weatherboarding had been replaced along with windows in the body, and the mill painted black with back of the cap in white, maintaining the tradition with Kentish mills of this type. David reported “The work has been carried out to a very high standard and the mill, which last worked in 1928, is now weathertight and preserved for the future”. Constructed in the early 1800s at Chimham’s Farm in Farningham, it was moved to its present position in 1880.

Kent County Council owns eight windmills, acquired mostly during the 1950s, to prevent their destruction from neglect. All of the mills are in sound condition, several now are even able to grind corn.

Councillor Brazier explained “The Council has ambitions for West Kingsdown mill, including the reconstruction of the gallery at the bottom of the body of the mill, used for reefing the sail made of sailcloth, known as the “commons”, commissioning a new fantail which turns the cap into the wind and, eventually, a new set of sails or “sweeps” to mount on the present stocks. Much of the mill’s machinery is still present and, if the funding were ever to be available, it could be made to turn again”.

The mill stands in the yard of Mill Farm in Pells Lane, West Kingsdown and can be visited by arrangement with farmer, Mr Michael Heaton te. 01474 852357