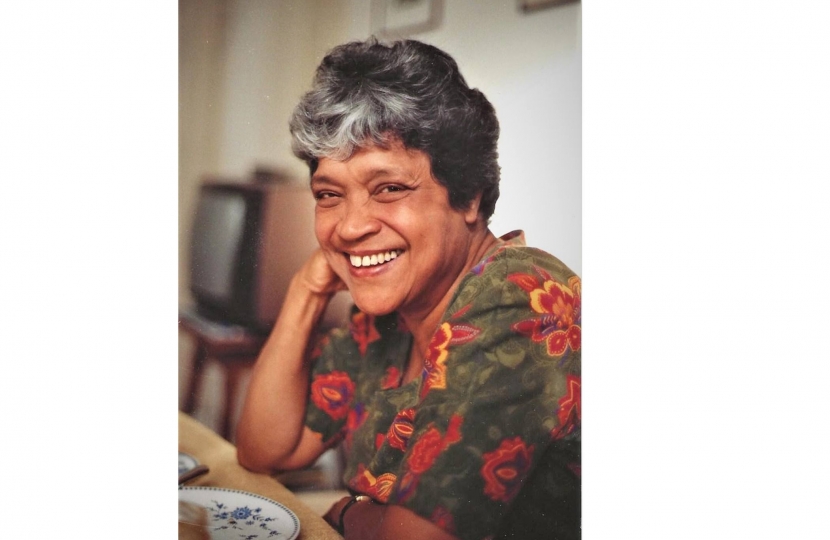 Sevenoaks and particularly the nearby village of Kemsing will greatly miss the ebullient and enthusiastic character of former district councillor Joyce Course who died at her home on Wednesday 17th April.  Joyce was an active member of the Sevenoaks Conservative Association and one of its Vice-Presidents.

Joyce was one of the youngest members of a large Catholic Indian family which emigrated to England in 1951.  She had a brilliant financial mind and considerable energy.  After initially working for the Civil Service Joyce joined Westminster Bank and later made national headlines by becoming the first woman Foreign Exchange Dealer at the London branch of the Continental Illinois National Bank Trust Co. of Chicago.  It was at Westminster Bank that she met Basil Course and they were married in 1964 in Lagos where he was in charge of three industrial banks.

Joyce, again broke traditional procedures, by being employed to run the Northern Nigerian Marketing Board Finance Scheme.  After returning to England they eventually moved to Kemsing in 1987 and Joyce retired the following year to devote herself to community service.  With the Cancer Research UK Sevenoaks Committee she helped to raise tens of thousands of pounds including £30,000 towards the Kemsing Room at Hospice in the Weald.  Many people in Sevenoaks have enjoyed her fund raising curry lunches, fish and chip suppers and quiz nights.

Joyce Course was initially elected as a Sevenoaks District Councillor for Kemsing in 1991 and after a two year gap gained re-election in a by-election in 1998 with a thirteen vote majority.  Over the years she built up her support and served on SDC until 2005.  As Chairman of the Kemsing Branch of the Sevenoaks Conservative Association she built up a strong committee of canvassers, deliverers and campaigners.  Joyce rarely took ‘No’ for an answer and believed she could overcome any obstacle irrespective of the reason.  She worked tirelessly for what she believed in and will be greatly missed by all those who knew, worked and respected her.

The Funeral Service is at Holy Trinity Church, Otford at 10.00 am Tuesday 7th May.

We’re investing more into young people’s mental health to help children get the best possible start in life. Read the article to find out more about what we’re doing to help mental health in the UK.