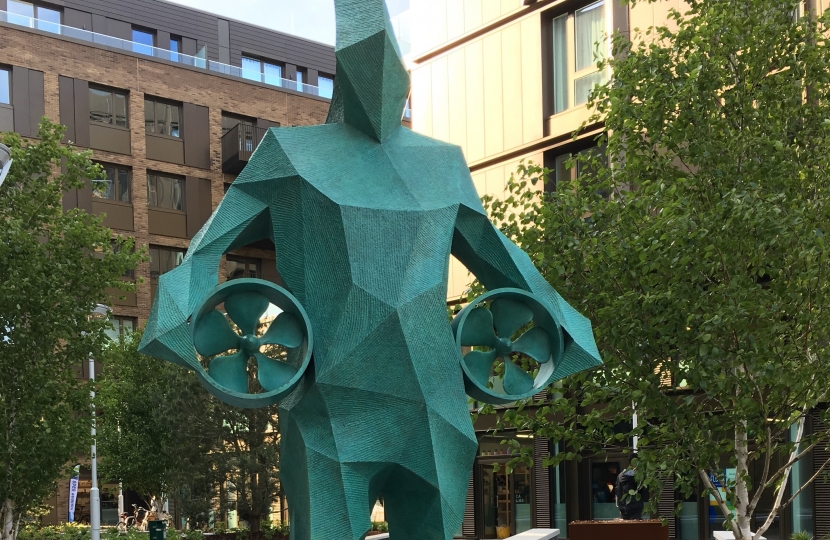 Cllr Roddy Hogarth, the District Council’s Public Realm Champion, has described the council’s pleasure at the prospect of bringing public art right into the heart of the town at a site close to Marks and Spencer.
He claimed that the final art work will be visually and physically accessible and have meaning for residents and visitors. “Outdoor spaces have become even more important than ever before and we need to make the most of them”, he added. “For example, the image here is "The Green Man" in Deptford, part of an art project artists working in the Second Floor Studios above M&Co Sevenoaks on the High Street, but I doubt our budget will stretch as far as something like this.”, he cautioned.
Proposals from experienced artists to produce a work of art to be installed at the site, have been sought. Because of its prominence, it will need to be appropriate and sensitive to the location and the Council is looking for something that has narrative meaning to the area.
Cllr Hogarth expects the four shortlisted proposals to go on public display in April and May this year.
Within the overall budget, £1,000 is allocated towards delivering a community engagement programme to ensure local involvement and “ownership” in the final artwork. He added that ideas enabling the expansion of the budget through sponsorship, grants, etc. will be most welcome.
Cllr Hogarth expects the four shortlisted proposals to go on public display in April and May, prior to the final selection of the winning design.

Many people do not realise that during the third lockdown some 50% of state school children have not been getting any live lessons from their teachers.