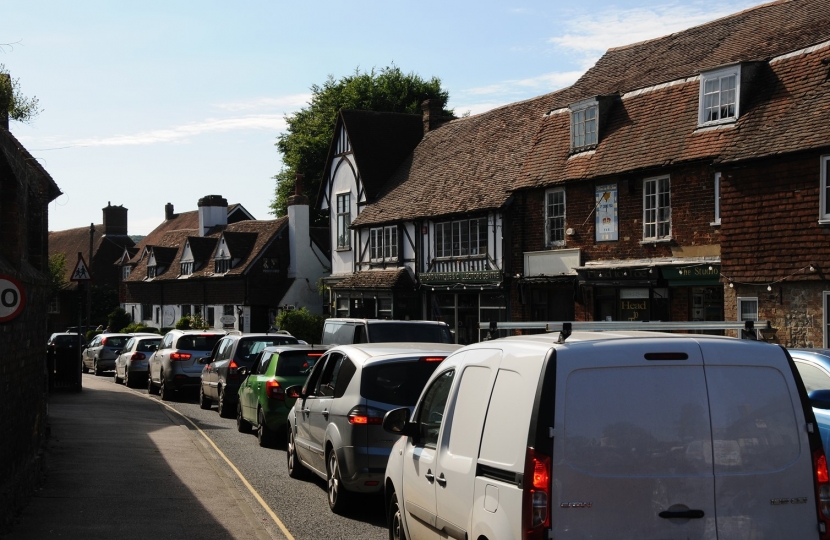 A delighted Conservative District Councillor, Irene Roy, was pleased to announce that, “KCC Highways had approved all the proposals in the Otford Traffic Calming scheme, as well as the planned 20mph limits.  Otford will be the first village in Kent to have a 20mph limit on an A-road.

The Otford Traffic Management Group, chaired by Councillor Roy, has consulted extensively with local residents who have been campaigning for slower traffic speeds for decades. “Of course, the scheme has had to be fully compliant with a wide range of regulations, so it was not always possible to deliver on some of the residents’ proposals” Irene explained. “However, I am sure residents will agree that the scheme will make Otford a safer, cleaner, and more attractive place to live, work and visit”.

Councillor Roy cited the many traffic calming measures to be adopted, including a 20mph limit along the High Street finishing just south of Otford Station.  The reduced speed limit will encompass the iconic duck pond and pedestrian crossing points along the way will be upgraded to improve safety.  Where a 20mph limit has not been possible, traffic calming measures have been introduced to ensure compliance with existing 30mph limits.  Other measures include upgrading the High Street zebra crossing with a flat topped speed table and a pinch point to create space to widen the pavement at a dangerously narrow spot to west of the village primary school.

“It is now anticipated that the first phase of construction will take place during the summer of 2021”, said Irene. “This is disappointingly some 6 months later than originally planned primarily due to delays caused by Covid restrictions.  The first phase of implementation will include the High Street and Station Road traffic calming measures as well as the 20mph limit.  The Parish Council and the Traffic Group will now concentrate on raising the remaining funds to complete the other areas of the Traffic Calming scheme”.

She went on to say, “I firmly believe that the traffic calming scheme is the very best that could be achieved for Otford and would like to thank those many members of the public, the Traffic Group, and  Councillor and Leader of Kent County Council, Roger Gough, who has been instrumental in bringing the scheme forward as well as contributing towards the scheme from his members’ fund”.

Matthew Scott
An update from Kent's Police and Crime Commissioner