Conservative Councillors Campaign for Better Broadband for Brasted and Sundridge 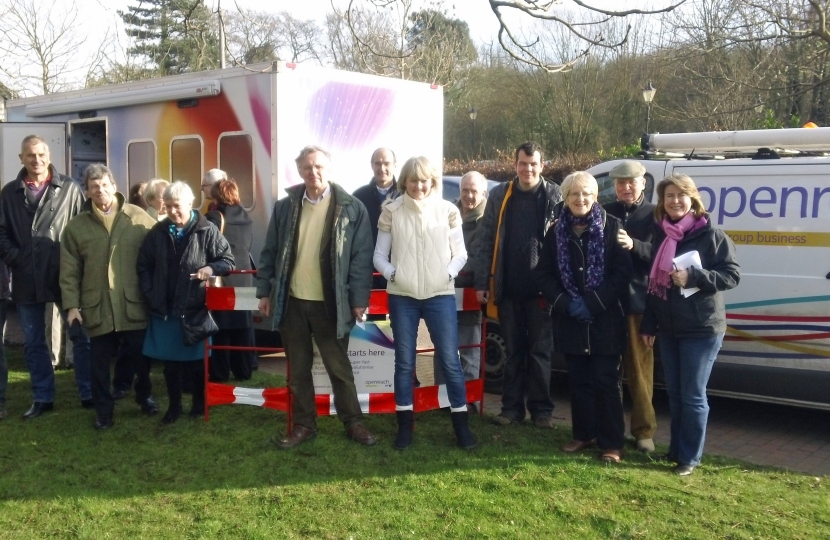 Brasted and Sundridge residents turned out in greater than expected numbers for a BT Open Broadband Roadshow on Brasted Village Green on Monday 18th February. Over 50 people attended the exhibition organised jointly by Sevenoaks District Councillor, Anna Firth, in conjunction with the Parish Councils of Brasted, Sundridge and Ide Hill.  Several parents brought their children along during the half term break to learn how fibre optic broadband works and how it is vital to the future of rural communities like those in Sundridge and Brasted.

“We were overwhelmed by the numbers attending.  Far more than we expected.  Many people, especially those running small businesses in Brasted, are very frustrated at the mind-numbingly slow download and upload speeds currently available.  Speeds such as 2 mega bytes per second are simply not good enough for the high number of homeworkers now living in Brasted and we intend to look now at all the options for getting a better deal for Sundridge and Brasted."

“The high numbers attending show that people are starting to realise what it means to be left behind by a technological revolution.  This is a very important issue especially for rural areas such as Brasted & Sundridge.  Kent County Council is already committed to making sure that 90% of Kent is upgraded to superfast Broadband by the end of 2015 but obviously I shall be working hard to ensure that the remaining 10% upgraded as soon after that as possible.”

Kent County Councillor Richard Parry (3rd from left) and Sevenoaks District Councillor Anna Firth (far right) with some of the attendees at the BT Open Broadband Roadshow on 18 February.