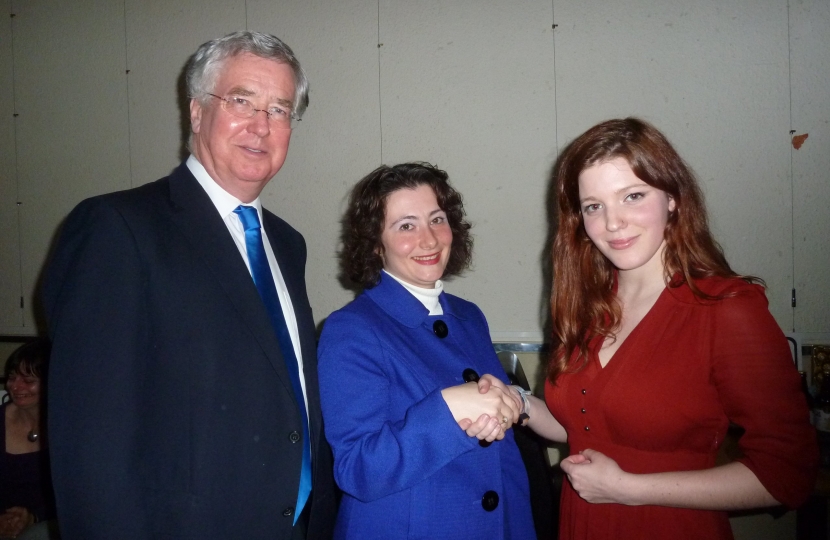 Sevenoaks Conservatives in association with the London-based charity Stop The Traffik held a charity event at the Stag Theatre, Sevenoaks last night (29th April) with around 70 people attending.

Sarah Hurtes, STT’s Schools Liaison Officer and Sevenoaks’ MP and vice-Chairman of the Conservative Party Michael Fallon both spoke about the curse of modern slavery in social and commercial situations around the World. The group then watched the 2006 Michael Apted Film “Amazing Grace” following the story of William Wilberforce’s struggle against the slave trade commerce and entrenched public opinion.

Sarah Hurtes spoke powerfully of the continuing problems of indenture and commercial slavery around the world and in particular that it is closer to home than many people realise. She described the case study of Sophie Hayes (www.sophiehayesfoundation.org/about-us/about-sophie/) thought to be the first person to be recognized as being trafficked from the United Kingdom. She also described that at present around 70% of the cocoa for chocolate comes from West Africa with a third coming from the Ivory Coast where people trafficking is an immense problem. Sarah described the increasing availability of ‘trafficked-free chocolate’ which has its own packaging logo and is produced without the use of slave or trafficked workers.

STT’s aim is to raise awareness about trafficking in local communities, to educate, advocate and raise funds to continue the work of William Wilberforce. Sarah said “William Wilberforce fought slavery by bringing the consequences of it to people in London. We want to see more Governmental action in the UK and to recognise slavery as an important issue. STT’s aim is to raise the profile of the issue world-wide which at the moment it isn't. As a consumer you have the power and the vote. You can be the modern day Wilberforce.”

Michael Fallon MP said modern trafficking of both migrant workers and sex slaves remained a serious international problem.  He wanted to see more effective enforcement of the law against forced labour, more focus on the supply chains and better support for victims.

More than £100 was raised for Stop The Traffik. Sarah Hurtes thanked Sevenoaks Conservatives for their financial support and for helping to promote the issue of people trafficking